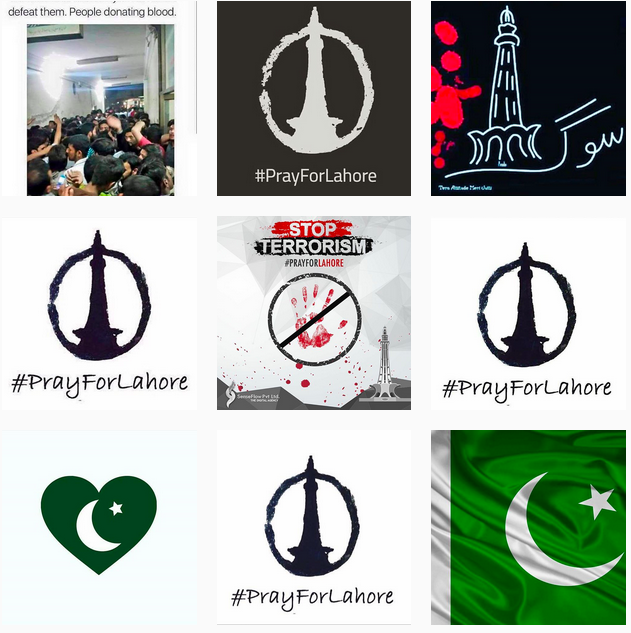 An overview of the emerging visual trends on Instagram in response to the suicide bomb attack in Lahore, Pakistan. Screenshots were captured using the hashtags #prayforlahorepakistan and #prayforlahore between 18:00 and 2:00 am GMT between 27 and 28th March, 2016.

A thematic grouping of visuals is suggested based on the social movement visual tropes as previously researched by media scholar Crystal Abidin. 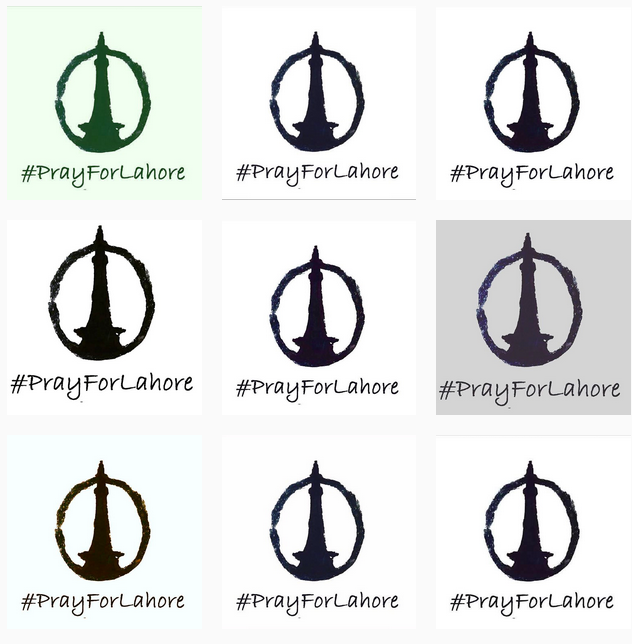 The Tower of Pakistan, a historic monument, bears political significance as the birthplace of Pakistan’s independance movement. One of the cultural landmarks of Lahore city, here it is combined with Jean Julien’s illustration for last year’s Paris Attacks. The Eiffel Tower is replaced by the Tower of Pakistan, requiring minimum editing. In this case the  illustration is captioned with the hashtag.

Variants of the symbol in green background, Pakistan’s national color and a black background with text in Turkish and Urdu are also shared.

Other variations include the tower on black background, black and white and color photography

Digital illustrations abound, focusing on the Tower of Pakistan, combined with the peace symbol or replacing the star of the Pakistani flag. Minimalist designs tones are used, highlighting the national colors green and white.

Many visuals posted by Turkish Instagram accounts illustrating solidarity by displaying national symbols such as flags and soldiers.

Paris, Istanbul and Brussels attacks. The slogan “I am + attacked city” is transformed into “We are Lahore” #humlahorehein (Romanized Urdu)

These are fewer in number as observed in previous attack contexts.

10).‘Grief hype-jacking’1)a concept introduced by Media Scholar Crystal Abidin, who is currently working on it.

Selfies and snapchat pictures posted under the hashtag #prayforlahore to attract traffic.